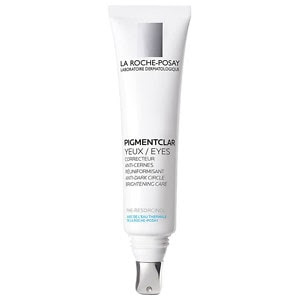 La Roche-Posay has already clinched their title as my go-to brand for when I have any sort of breakouts or sensitivity, mostly thanks to the magic potion that is Effaclar Duo.  But their new eye product, PigmentClar for Eyes, is really catapulting them into first place on the list of "brands I trust".  I used to get puffy eyes, but never the dreaded dark circles.  Well, kids, on the eve of my 36th birthday I now have both the puff and the darkness under there.  It's not something that makes me psyched, but LRP has given us options.  First off, they've addressed that there isn't just one type of darkness under the eyes.  There's blue-toned undereye circles, which can be genetic, fatique-related, or, shocker, age-related.  Then there's brown-toned undereye discoloration, which can also be genetic or age-related, but also can be caused by my beloved sun, and chronic rubbing of the eye area.  I have more of the latter version, but it can be hard to tell which type you have, so why not use an under eye cream that targets both issues?  This formula contains light-reflecting pigments that neutralize the colors you don't want to show underneath, but that's just the temporary solution.  It also contains caffeine to promote decongestion in that area, and an ingredient called phe-resorcinol that targets melanin production in the skin.  Basically, that ingredient treats sun-damage, which is something we all have, no matter how good we are about using sun protection.  There's nothing we can do about our genetics, but here's certainly ways to help reverse sun damage, and it's important to do in the often-neglected under eye area.  Also, the cooling metal applicator doesn't hurt when it comes to puffy eyes.  It's great in the morning when you first wake up, but I like to use it in the middle of the day as well for a little cool-down/perk-up effect.  Pair with an afternoon cup of coffee and you've never felt better.