The goal backstage at Badgley Mischka?  Recreate a dream-like movie scene.  Make it romantic.  Make it glowy.  Make it mystical.  Make people want it.  Tom Pecheux, Peter Gray, and Deborah Lippmann were in charge of doing just that, and I think they succeeded.  What do you think?﻿ 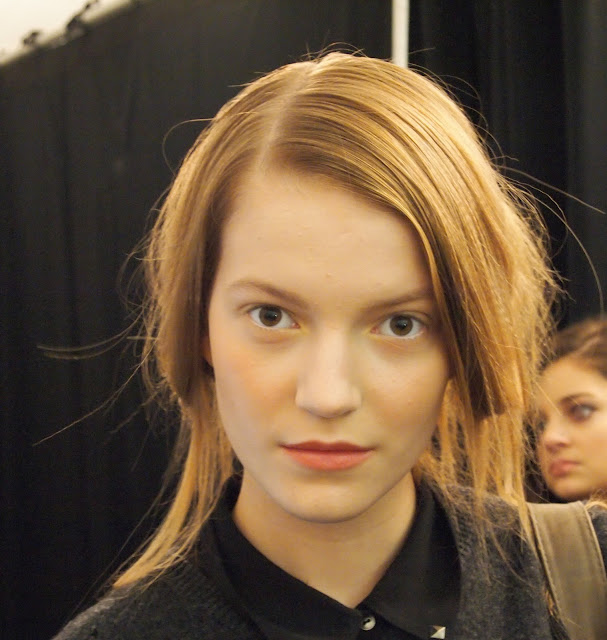 Makeup:
Tom Pecheux, genius of beautiful skin, was doing the makeup backstage at Badgley Mischka using MAC cosmetics.  He went super minimal, even more minimal than the trend for spring 13 so far, with delicate skin and a subtle halo of yellow on the eyes.  The backstage beauty look was inspired by A Midsummer Night's Dream (the 1930's version), meaning the look was very ethereal and slightly unkempt.  Imagine nymphs and sprites and such.  Knowing this my questions for Tom were more about skin than about makeup.  Here is what he has to say about taking care of your skin:
"You know when you want to do that you can use any type of foundation.  What is important is the skin care you use before.  Because if your skin is dry, the foundation is going to stick in a nasty way to your face and it’s going to be very difficult to blend…to work it.. because it will be stuck in the dry skin.  When you prepare your  skin very well and you moisturize the skin it’s going to make it very smooth and you can really work the foundation and create a coverage with an extremely thin layer of foundation."
So obvs I asked what his favorite moisturizers are: 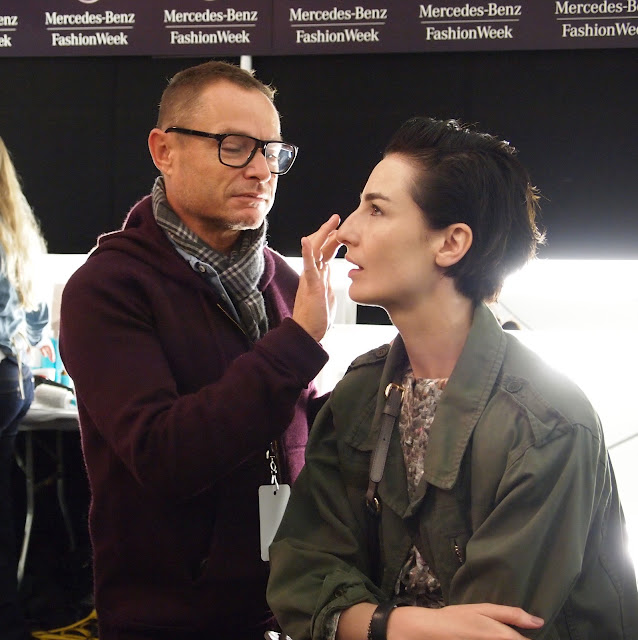 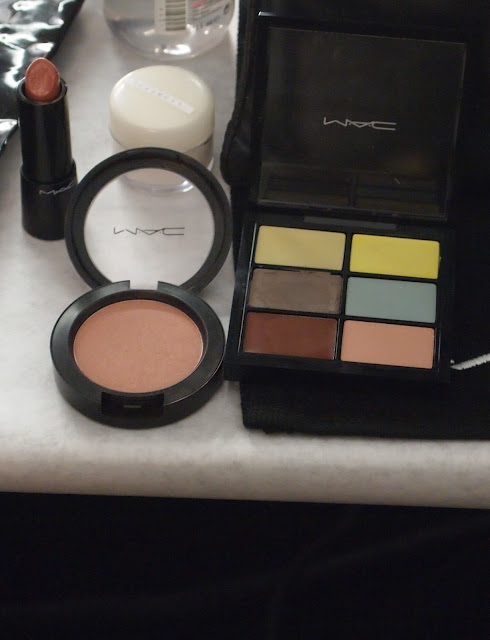 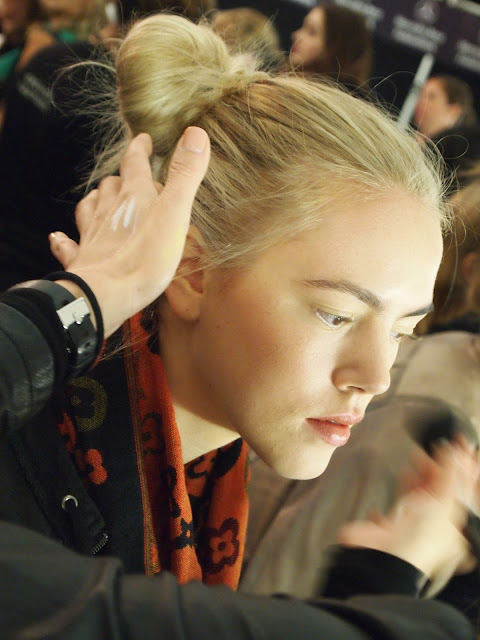 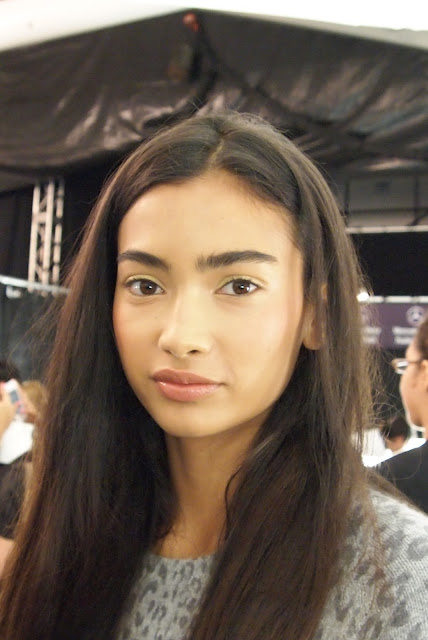 Hair:
I could listen to Tom talk all day about skincare and his favorite products, but I had to move on to Peter Gray for his wealth of knowledge about hair (and his cute accent). Peter Gray is great to listen to about hair for so many reasons, but mainly for his passion and determination to get the look he wants for a show.  He was challenged this time to make floaty, bouncy hair, rather than the typical stiff runway hair that requires lots of product.  He wanted wispy pieces that floated down the runway, versus big, teased looks.
First he used new Moroccanoil Volumizing Mousse (available in October, and I can't wait) to damp hair, parted the hair on the side, and then blew the hair dry.  Once hair was dry he used the tiniest crimper I've ever seen, so you didn't get these big 80's crimps, but a really lightweight texture.  (Note to self: must find this crimper).  The trick though was that he kept the crimper moving, rather than clamping hard down on each piece and frying the hair, so the crimps were nice and soft.
Here's the trick that kept the whole do in place: He lifted the top section of the hair so it was out of the way, and created a horizontal braid from ear to ear that served as a shelf to pin all the hair in to.  Then he brushed the hair back down over the braid so it was hidden, and looped the bottom of the hair back in on itself, pinning it into the braid shelf.  He pulled random strands out so they would float around the head.  All that was left to do at this point was fluff the hair into a voluminous shape, spraying Moroccanoil Luminous Hairspray Strong as he went.  He tucked a few flowers into the braid shelf with bobby pins, and RIGHT before they went onstage he was there misting Moroccanoil Glimmer Shine Spray on the top of the head to give a halo-like finish. 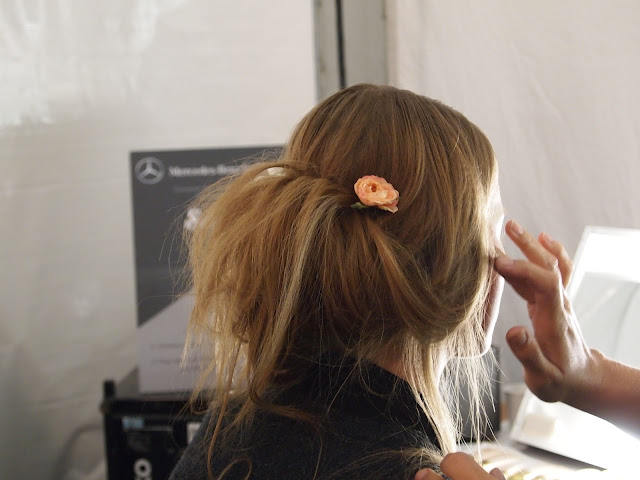 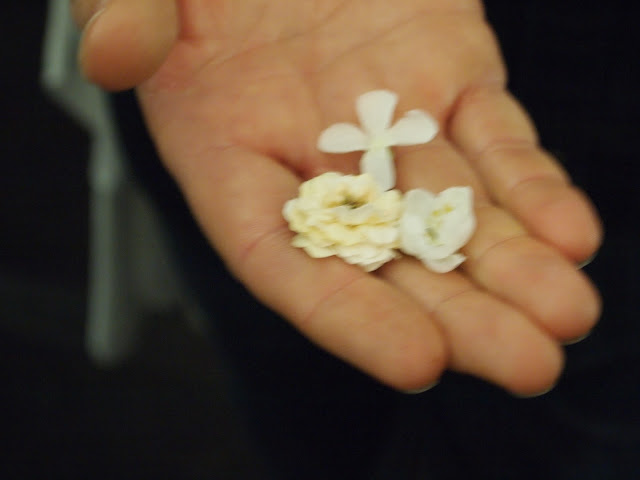 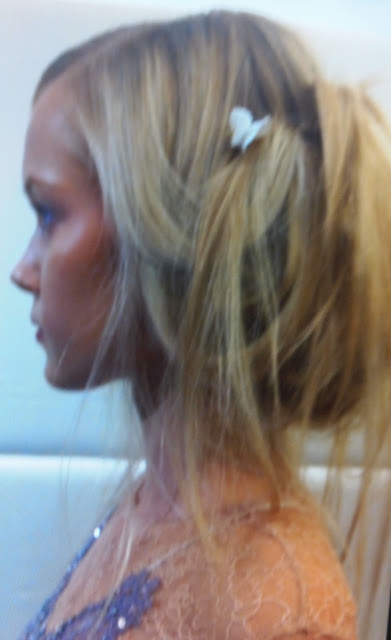 Nails:
Deborah Lippmann used Modern Love on the models' nails, her take on a new nude.  She thinks that this dusty mauve is the freshest nude... we've already been down the "greige" road, and this is actually a color that looks good on a mutlitude of skin tones.  Deborah had plenty else to share backstage, as far as tantalizing us with tidbits of information on future trends.  She didn't give too much away, but did tell us she would be introducing a new take on her glitter nail colors for spring!  And with the successful launch of her first lipcolor recently, there is plenty more coming up in that department. 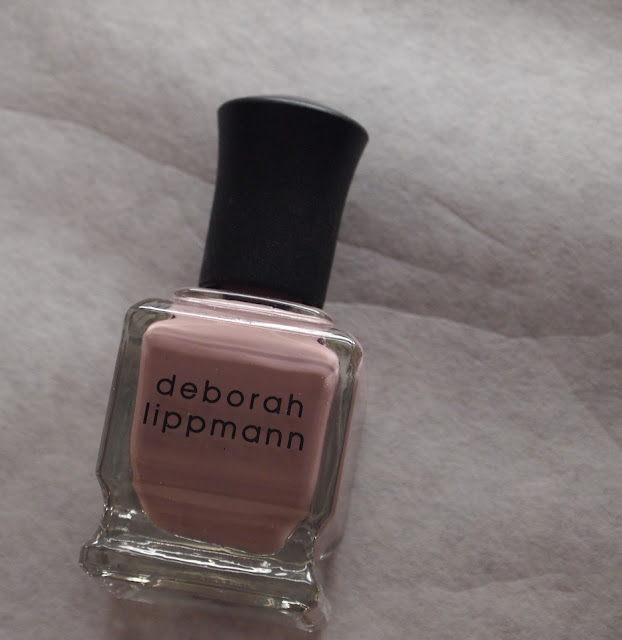 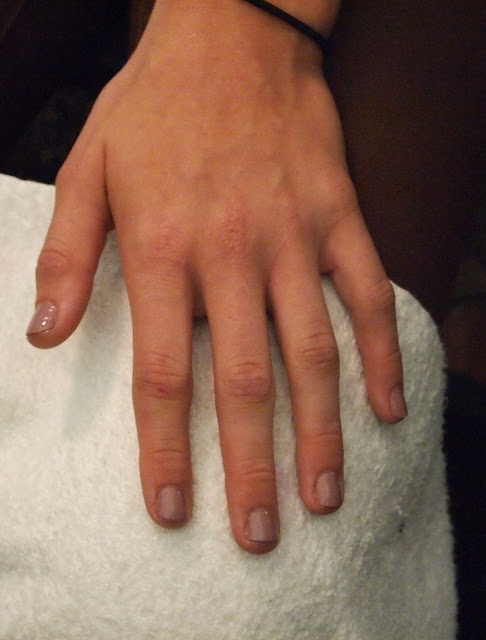